How do we make AI models less biased?

Our work is accepted to the Conference of Empirical Methods of Natural Language Processing (EMNLP) 2018 as a short paper. It will be presented at Brussels, Belgium in this coming November! See the arxiv version.

Fighting abusive language (a.k.a. hate speech, toxic comments) online is becoming more and more important in a world where online social media plays a significant role in shaping the minds of people. Nevertheless, major social media companies like Twitter find it difficult to tackle this problem. As more and more people freely express their opinions in social media, the amount of textual contents produced every day grows almost exponentially, rendering it difficult to effectively moderate user content. For this reason, using machine learning, AI systems to automatically detect abusive language is promising for many websites or social media services.

Although many works already tackled on training machine learning models to automatically detect abusive language, recent works have raised concerns about the practicality of those systems. This work [6] has shown how to easily cause false predictions with slightly modified (spelling errors, grammar changes) examples in Google’s API.

The problem does not reside in simply inaccurate predictions. A study from Google found out those machine learning detection systems can have “unfair” biases [4] toward certain groups of people. For example, the sentence “I am a gay man” does not imply any abusive or toxic intention, but is highly likely to be flagged by those systems. This is called the false positive bias. Such bias is caused by the fact that the term “gay” is so frequently used inside those toxic comments that AI systems mistakenly take that the word itself as bad.

Our research work also found out similar phenomenon when we tried to train a sexist language classifier. Since our dataset (with none/sexist tweets) used for training contained so many examples with female identity terms (she, female, her, etc.), sentences like “You are a good woman.” was considered sexist.

This is an important problem when you want to build a robust, practical abusive language detection system that needs to be deployed for real use. If there are too many false positives being flagged, it will hinder any kind of constructive discussion about those specific identities who are susceptible for being condemned, such as Muslims and women.

Nevertheless, solving this problem is not easy. The simplest way to solve this problem is to collect more texts to increase the generality of the training data. However, collecting abusive language datasets are known to be difficult because they are often subjective to individuals and lack contexts, making them hard for non-experts to annotate [12,13].

In our work, we tackle this problem by firstly measuring the gender bias contained in common deep learning techniques when trained on widely used abusive language datasets. Secondly, we propose three bias mitigation methods and evaluate their effects.

How do we measure gender bias in abusive language detection models?

Gender bias cannot be measured when we just see the classification performance of the test set divided from the original dataset. This is a common practice for evaluating classification models, but in this case, the test set results do not imply anything about the gender bias. Therefore, we generate a separate unbiased test set for each gender, male and female, using the identity term template method proposed in previous work [4,8].

The intuition of this template method is that given a pair of sentences with only the identity terms different (ex. “He is happy’’ & “She is happy”, “Men are f**ked up” & “Women are f**ked up”), the model should be able to generalize well and output same prediction for abusive language.

Using these templates, we generated 576 pairs by filling them up with common gender identity pairs (ex. men/women, he/she, etc.) and neutral & offensive words from the vocabulary of the dataset.

What are we going to compare?

The distributions of the datasets used for training machine learning models are the most important factors of these gender bias. The dataset size, label imbalance, etc. are all attributes of a dataset. We compared two publicly available and widely used abusive language datasets:

Sexist Tweets (st) [12,13] — This dataset consists of tweets with sexist tweets collected from Twitter by searching for tweets that contain common terms pertaining to sexism such as “feminazi.” The tweets were then annotated by experts based on criteria founded in critical race theory. The original dataset also contained a relatively small number of “racist” label tweets, but we only retain “sexist” samples to focus on gender biases.

Abusive Tweets (abt) [5]—a large-scale crowdsourced abusive tweet dataset with 60K tweets. Their work incrementally and iteratively investigated methods such as boosted sampling and exploratory rounds, to effectively annotate tweets through crowdsourcing. We transform this dataset for a binary classification problem by concatenating “None/Spam” together, and “Abusive/Hateful” together.

**details of the hyperparameters are included in the paper

There are various studies [2,3] that text embeddings contain bias. We want to verify this again on this specific task.

Here are the results:

These are some interesting points to note from these two results:

Then, how do we mitigate those identified gender bias?

Since we have identified gender biases exist in these models, it is natural to think of how to reduce them. Inspired by other techniques proposed for different NLP tasks other than abusive language detection, we propose three bias mitigation methods, which can easily be combined together.

Here are the results:

Check out the oral presentation of this work for more details!

[12] Zeerak Waseem. Are you a racist or am i seeing things? annotator influence on hate speech detection on twitter. In Proceedings of the 1st Workshop on Natural Language Processing and Computational Social Science, pages 138–142, 2016. 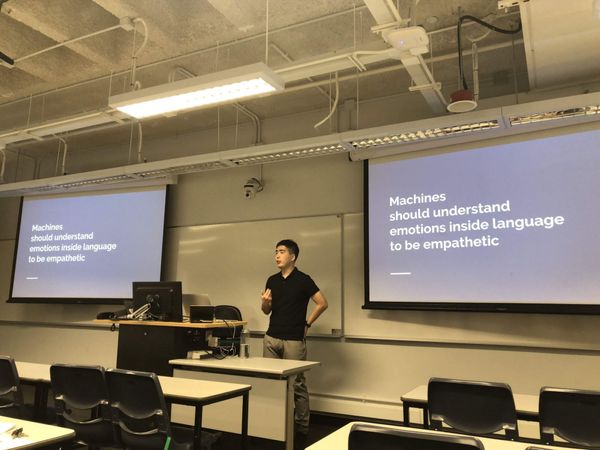 Finishing up two years of MPhil degree, what’s next? Two years in Academia was great. In Summer 2016, I decided to start a new life as a postgraduate research

Thoughts on language education in the era of artificial intelligence. In the era of machine translation, should we stop learning foreign languages?